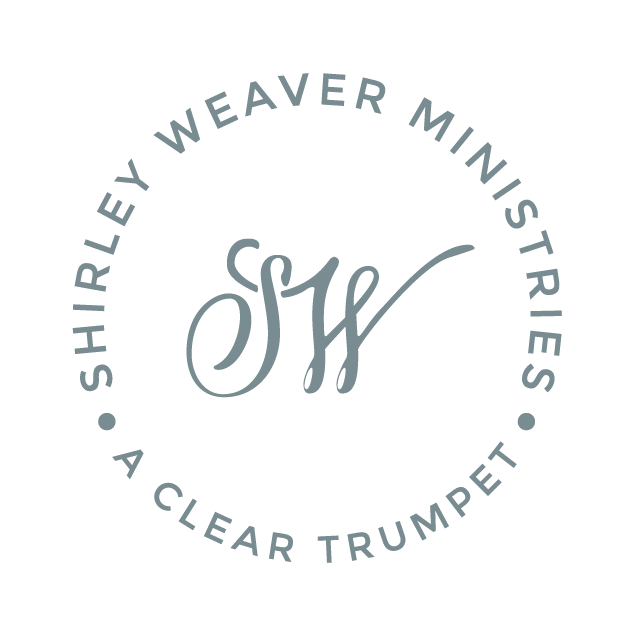 Scripture likens God’s voice to a trumpet, a clear and distinguishable sound. The message He intends is a clear trumpet. Our desire for the prophetic ministry of Shirley Weaver Ministries is to clearly speak the Lord’s message to our culture and world.

Satan is behind anything that comes to steal, kill, or destroy. Resist him. Use words—aloud! Every time. Resist him! He will flee. As often and as many times as necessary, stop what you are doing and resist him—the blood of Jesus is against Satan! Release your faith according to God’s plan. Do it now.

The conduct of early church leaders was critical to the foundation being laid for future generations. For the sake of a strong future, church leaders responsibly set an example for new, maturing converts to follow. That was the context of Paul’s invitation to follow him as he followed the Lord. Paul’s simultaneous expression of strength and humility was a solid example to follow.

Applying the principle, we observe Godly qualities in those who lead and are blessed by their example and motivated to achieve like standards. Humanly speaking, we learn more by example than almost any other way, and so, when those we esteem fall short of the mark, the burden of error is felt by everyone involved.

On the positive side, new resolve often results from a mistake or misstep—resolve for greater integrity, commitment to right order, and determination to imitate the Lord, so others see His example lived through us. Central to the idea of leading by example is our responsibility to forgive the person whose example did not hold true. Because we forgive, the best days are ahead, not behind, and unexpected strength—with humility—is possible despite a wrong suffered.

Lifting our expectations to believe again—to trust and hope again, the words of the familiar hymn say it well: Lead on, O King Eternal . . . we follow!

The Power Of Belief

Belief transports us. An idea sown into the consciousness develops there and ultimately takes on the form of something believed. We dwell on it and even live as though it were true, allowing the idea and everything attached to it to enter our lives and carry us to its fulfillment.

Ideas come, take place in our thoughts, and begin to grow. Belief builds and develops until a belief structure settles into place. Ultimately, what began as opinion, suggestion, impression, concept, mental image, or plan grows until little can be done to dissuade us.

Too often we entertain wrong ideas and grow to believe in things the Lord has no part in. Jesus said what develops in the heart eventually comes out—is spoken or acted upon. Since what comes out actually first went in, we are wise to guard what we allow in.

In Jesus’s parable of the talents, the master returns from a trip and inquires of his servants about portions he gave them to oversee while he was away. The master asks where they invested, and the amount of increase gained for him? The servants’ answers determined what reward they would receive for their stewardship, a reward paid in the form of portions of the master’s authority so that now those who stewarded wisely were empowered to rule in the master’s name.

“So he who had received five talents came and brought five other talents, saying, “Lord, you delivered to me five talents; look, I have gained five more talents besides them.” His lord said to him, “Well done, good and faithful servant; you were faithful over a few things, I will make you ruler over many things. Enter into the joy of your lord.”

“He also who had received two talents came and said, “Lord, you delivered to me two talents; look, I have gained two more talents besides them.” His lord said to him, “Well done, good and faithful servant; you have been faithful over a few things, I will make you ruler over many things. Enter into the joy of your lord.”

“Then he who had received the one talent came and said, “… I was afraid, and went and hid your talent in the ground. Look, there you have what is yours.”

“But his lord answered and said to him, “You wicked and lazy servant… you ought to have deposited my money with the bankers, and at my coming, I would have received back my own with interest. Therefore take the talent from him, and give it to him who has ten talents.” For to everyone who has, more will be given, and he will have abundance; but from him who does not have, even what he has will be taken away.” (Matthew 25:14-29)

According to this parable, everyone owning possessions, lands, etc. will be given still more until accumulated portions become even greater! Increase is foundational to God’s Kingdom on earth. Believe God regarding your stewardship of those things entrusted to you. Actively believe Him. Release your faith.

“And they will dwell safely there, build houses, and plant vineyards; yes, they will dwell securely, when I execute judgments on those around them who despise them. Then they shall know that I am the Lord their God.”  (Ezekiel 28:26)

Four hundred years of bondage began as a mission to rescue the patriarch Jacob and his small clan of seventy. They became history’s epic story of mass deliverance—a nation of millions delivered overnight from slavery at the hands of Egyptian masters. Millions held for hundreds of years were suddenly freed, their tormentors urging their departure with gifts of gold and silver. Not your typical rescue mission.

Your personal deliverance can parallel this one. The mercy of the Lord is everlasting. His judgments are certain… it’s time! God has intervened on your behalf. Doors that held you back have opened. Your soul can be refreshed with hope, the impasse lifts. The siege is broken. You are free. You are home. Your season of waiting has changed to one of rescue—to deliverance and a way of escape… plus abundance.

The Lord directs according to who we are becoming—His master plan for each life. Details large and small are woven into the fabric of each God-given destiny, details loaded with His appealing love, designed to move us beyond life’s snare.

We are not predestined in the sense of being pre-judged, automatically good or bad as though we were unable to live in a way other than an ascribed predisposition. Actually, all of humanity is judged guilty—the guilt of sin exists as an obstacle for all, but all are also judged eligible for God’s forgiveness—redemption through the atonement of His Son, Jesus Christ, a perfect Savior.

All men are eligible to exchange out-of-order lives on the altar of God’s Love; they are eligible to receive in exchange His gift of redemption—rightly ordered lives: “He forgives all my iniquities (inherited sin), heals all my diseases and redeems my life from destruction.”

The prophesied blessing is Paul’s powerful benediction: “Now to Him who is able to do far more abundantly beyond all that we ask or think, according to the power that works within us, to Him be the glory in the church and in Christ Jesus to all generations forever and ever. Amen.” (Ephesians 3:14-21, NASB)